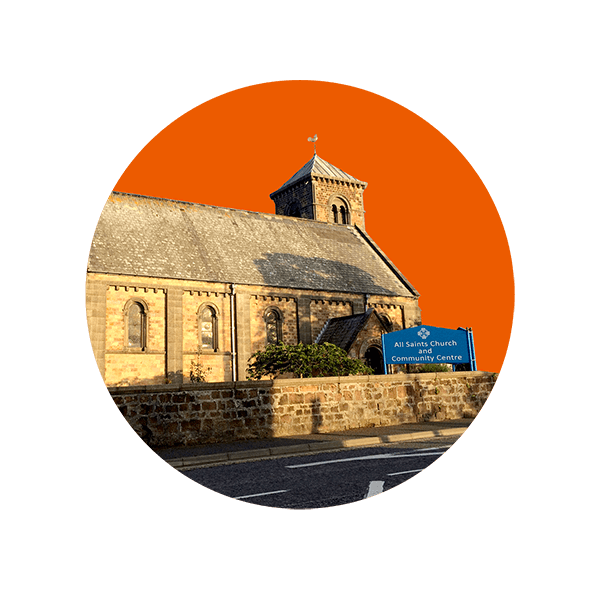 In 1844 All Saints Church was built due to a large increase in the mining population around the village of Tuckingmill. The architect, Mr. John Hayward of Exeter (1807-1891) designed and built the church in a Romanesque or Norman style. The building was consecrated by the Lord Bishop of Exeter on Monday July 7th 1845, along with the accompanying churchyard.

The granite work is worthy of notice, the pillars are carved out of one piece of granite, and the Chancel Arch is probably the finest arch in any Cornish Church. Another treasure is the magnificent twelfth century Font bowl. It originally belonged to the ancient Chapel of St. Derwa at Menadarva, near Kehelland, which was one of seven such Chapels in the old mother parish of Camborne. Upon the building of the new church in 1844, the Basset family presented this medieval treasure to the church. They had somehow acquired it in 1700’s and it had been “reposing in Miss Mary’s Garden”, in Tehidy.

A new North Chancel Window, with Angel and Golden Censer was installed on December 4th 1898, then in July 5th 1900 a new solid oak Chancel Screen and Clergy Stalls where put in place. They were dedicated on All Saints Day (the Patronal Festival), November 2nd 1902.

On January 5th 1908 a near disaster was averted when a fire broke out in the Church which was only quelled by timely discovery and prompt extinction, the cause of the blaze being a roof beam adjacent to the boiler-house flue catching alight. A bucket chain was formed, while burning wood fell all around the organ as well as much water! Little damage was done, however, for the Parish Magazine records that, “we were able to hold our usual service in the evening of that day and at the close sang the “Te Deum” as a solemn act of Thanksgiving to God for merciful deliverance from the peril of fire”.

The oak chancel screen has since gone, falling victim to insect infestation in the 1950’s, while a new All Souls Chapel was created in the south aisle, in about 1970 with accompanying aumbry given by the late Lord Bishop of Truro, Dr. J.M. Key, the patron of the parish. A central nave altar and the return of the choir stalls to the chancel have been late 20th century re-orderings. 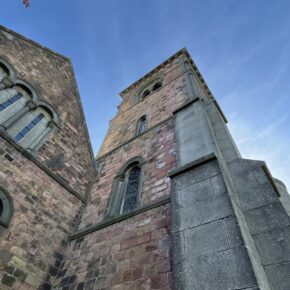 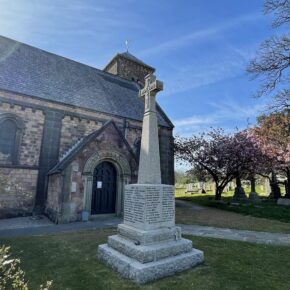 In 1861 a harmonium was introduced to accompany the singing, at a cost of £10 10s. During the Incumbency of the Revd J.R.W. Bampfield (1875-1880), the first pipe organ was placed in the Church. At a Jubilee Organ Recital held on July 9th, 1895, by Mr. F.J. Mountford, of St. John’s Truro, a collection was taken for the enlargement of this small organ, with £100 being raised. In April 1913 an enlarged instrument was re-opened with a new electric blower, the work being entrusted to Messrs. Heard’s of Truro; the recitalist being Mr. A.H. Baker, the Organist of Camborne Parish Church.

The first Choral Celebration of the Holy Communion was held at the 8.00 a.m. service on Easter Day 1921 with 150 present. The Vicar wrote in the Parish Magazine “It was gratifying to note that every member of the choir was there”.

In 2021, at its recent meeting the British Institute of Organ Studies has recommended that the Hele/Heard Organ at All Saints Church be awarded a Grade II Historic Organ Listing. This endorses the historical significance of this fine instrument. This largely unaltered and versatile organ, dating from 1876, is now listed in the Institutes Register of Historic Pipe Organs as being an instrument of importance to the national heritage of All Saints and one deserving careful preservation for the benefit of future generations. 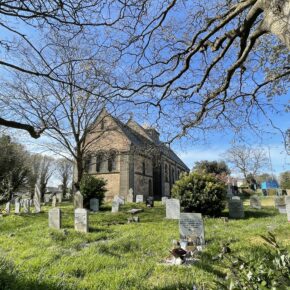 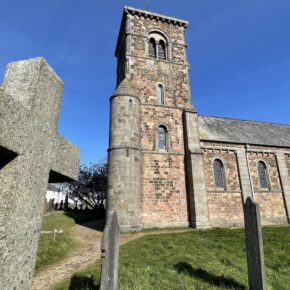 The late nineteenth century was a time of great missionary zeal. In October 1888 there was a special Mission in the Parish, and again in February-March 1893 and March 1897, with meetings led by Captain Riley, Church Army Lay Missioner, with his van.

The First World War heralded the break-up of the old social order and climate. In March 1919 there were at least twelve burials owing to a flu epidemic, while 1920 saw the closure of many local mines and great unemployment in the Parish. This led to a high emigration rate from all the mining areas of Cornwall, to foreign climes where work was not just a hope, but a reality. The War Memorial Cross in the Churchyard which was Dedicated on Saturday February 7th 1920 by the Lord Bishop of Truro, containing 55 names.

The post-war years have brought some changes, as well as new hopes and visions for the future. A dedicated core of prayerful people remain at the heart of the congregation at All Saints Church.

The churchyard is a beautiful space for nature and contains the headstones for a few people of note. Visitors to the church can pick up a heritage trail leaflet with further information.